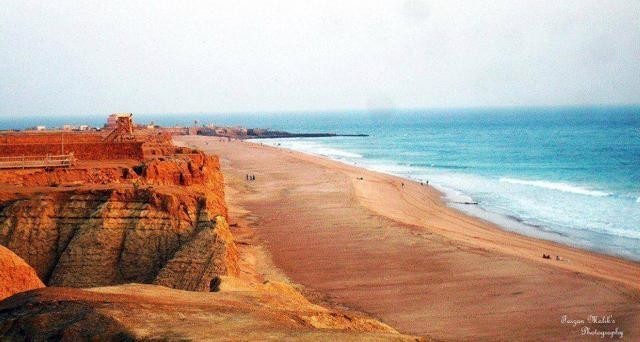 The beach at Cape Monze, or Cape Mount as it is famously called, seemed like the best spot to go to provide our children an outlet for their energy. Cape Mount in particular due to its unique setting and excursion value.

Many people from all over the world with friends and family visit this awe-inspiring seaside with a group of friends. Glimpses of its beauty are yet etched in my mind. From the highland, where the people are used to do parking, looking down at the long stretch of the pristine beach is very unworldly and then descending down to the untouched seashore through mountain rifts adds a thrill to this spectacular experience.

Cape Mount is actually a headland situated at the end of the triangular peninsula, which stretches out of Karachi’s mainland and juts into the Arabian Sea. The cape mount is formed because of the convergence of a low lying mountain range with the sea. Logistically speaking, it is the farthest one can go westwards while remaining in the precinct of city. In case to get there, one has to bypass a string of beaches situated at the base of the similar triangle – Sands Pit, Hawks Bay, French Beach, Paradise Point and the likes – and continue until the road ends. Because of its remoteness, and unavailability of facilities like beach huts, the place is unspoiled and less crowded.

To neglect the scorching heat-wave in the season of summers, people usually left home really early in the morning – so early that when people hit the road, both the moazzin and the rooster are used to calling for pre-dawn prayers. At that time of the day, roads look wider and saner, making it a pleasurable and comfortable drive; a luxury which isn’t so common around the city of Karachi. It is also soothingly quite, with just birds humming and singing throughout the one hour or so journey.