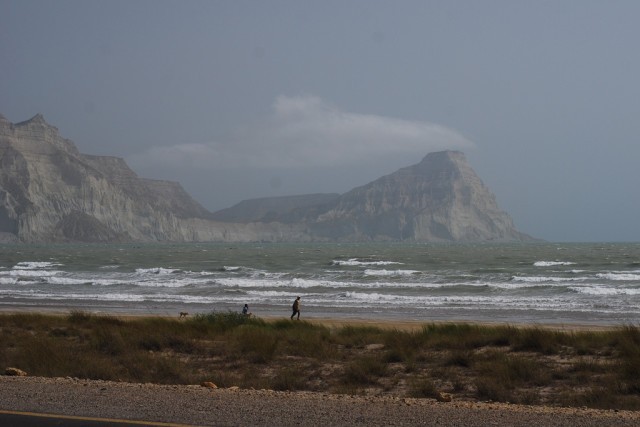 The outskirts of Ormara beach is a breathtaking view of water and mountains from the ongoing highway.
Ormara, is a port city in Gwadar District in Balochistan. It is located in the Makran coastal region, 360 km (220 mi) west of Karachi and 230 km (140 mi) east of Gwadar. This port is also mentioned in Periplus of the Erythraean Sea as Oraea. The population of Ormara is estimated to be around 40,000, with majority Baloch – 50% are Sunni Muslim, 50% are Zikri Muslim.

Ormara is an old coastal town. Its historical routes are linked with Alexander the Great, who stayed here with his army for a few days on his way back from the Indus region after conquering Sindh, Punjab and the Khyber Pakhtunkhwa regions in 400 BC. One of his generals, Ormoz, died there, and the present-day city was named after him. For a few centuries, Ormara remained a battle field between the Baloch Sardar (local feudal) and foreign aggressors. Before independence, it was part of the State of Lasbela and afterward it became part of Makran Division.

Ormara has a port and fish harbour. The Jinnah Naval Base of the Pakistan Navy is located at Ormara.

After construction of Makran Coastal Highway and the Jinnah Naval Base, many local industries have established here with jobs for locals. This also integrated the area more with the mainstream Pakistani economy and major urban centres allowing for easier transport of goods, commerce and people. Most residents make their livelihood from fishing, while a few work in Middle Eastern countries.